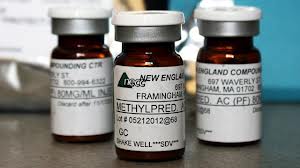 200 of its patients the steroid tainted fungus I have been watching the developments of the fungal meningitis outbreak. Although there are more questions and answers at this point, one big question is:

Who Are All Entities To Consider Responsible To

It is simple to look at the NECC the “manufacturer” of the products. Initially the 3 batches of methylprednisolone acetate were implicated, but now all of their injectable drugs are under suspicion. Their web site is down and they are no longer doing business. So chances are they do not have close to enough assets or insurance to to compensate all of the victims.

Already commentators have discussed potential responsibility on the part of the Clinic and medical facilities that purchased the drug . In fact, in New Jersey a lawsuit has included   healthcare providers. Some of the issues are what steps did health care providers take to see that the steroid was safe for use. There were red flags out there as NECC had already been warned by the FDA not to engage in certain practices.

It is evident that the New England Compounding Company was making this steroid in bulk and not in response to individual prescriptions which was against Massachsetts law. It’s hard to imagine that those purchasing the drug did not know that it was not being provided  per patient prescription.

Lou Diorio, a consultant to compounding pharmacies was quoted as saying it’s harder to keep everything sterile when working with large amounts. And he gave many ways the bulk manufacture could contribute to allowing the fungus. (Source: article by Mike Stobbe) The steriod comes in a powder and a liquid is introduced creating a liquid mixture. The two types of fungus Aspergillus and Exserohilum are common . However no one has confirmed the source of the fungus.

Sister Companies of NECC Ameridose and Alaunus  Are Being Looked At

Rueters news service repoted that NECC and Ameridose and Alaunus are owned by Gregoroy Conigliaro and brother in law Barry Cadden. Regulators are looking at “goverance issues”. As an attorney I would be looking at mutual control and de facto partnership issues.

Ameridose seems to be the big player in the compounding industry. In 2011 it moved into a 70,000 square foot facility. They also hold a license here in Ohio. What is intriguing is that in June Ameridose won a contract to compound and repackage drugs for Health Trust Purchasing Group LP, a consortium of hospitals and surgery centers with combined annual purchasing volume of more than 20 billion dollars whose owners include HCA holdings Ins. a hospital giant. (Source:Reuters article by Tim McLaughlin, Toni Park and Aaron Pressman.)

The Suppliers and Distributors of the Steroid

No one has identified the company that supplied the powdered steroid. No one has said whether other intermediary distributors are involved. But they could certainly be players in this critical outbreak and the lawsuits to follow.

Anthony Castelli attorney represents persons that are injured or had a loved one die as a result of the negligence of others. He has authored two books and coauthored the best seller Wolf in Sheep’s’Clothing. He has tried over 25 civil injury claims.

He helps victims from across Ohio. With regards to meningitis he has already talked with patients and consumer advocates and knows the fear out there in people that have been injected and have contracted meningitis or are concerned about contracting it. If you believe you have been given a tainted shot Anthony will consult with you  at no cost or obligation. Call him today at 513-621-2345 or 1-800-447-6549

Other Sources of Information: State of Ohio and Federal

As a Cincinnati attorney for meningitis help this is an update on the meningitis infection especially for Ohio and Hamilton County and Warren county. Just yesterday when the Center for disease Control raised their count to 9 for the State of Ohio, they mentioned a Warren county man that contracted meningitis.

The Cincinnati pain Management Center is the only facility so far in this are that has been identified as giving steroid shots with the tainted fungus from NECC. Now there are more recalls of all of NECC drugs and the CDC and the Health department has identified others that gave injected steroids that may or may not have contained contamination.

For the most recent update from the CDC click here.

Please call us with your legal questions about your rights. Two lawsuits have already been filed against NECC. And the undercurrent is that they may not have enough insurance or assets to pay for everyone’s death or illness. Free consultation for legal hep at 513-621-2345 1-800-447-6549

The Center For Disease Control keeps a running tally on a daily basis of the number contracted meningitis by State and by date. Their first count  was October 6th and listed 64 cases with 7 dead. At that time one Ohio meningitis case was listed. As of Oct 16, 2012 there are 223 listed with 15 dead. Two are peripheral injections vs epidural.

In Ohio the disease toll is now 7. The first three known were from Hamilton county, Morrow and Crawford County. The last 4 were from Marion County. In Cincinnati it is estimated at least 200 were injected with the tainted steroid at the Cincinnati pain management clinic.

What is going on with those 200 people. One man has been hospitalized. Presumably no one else so far has been diagnosed, but that does not mean other will not be. there is a long latency to this disease. But I can tell you people are scared . I’ve received phone calls and email. They are confused about what to do. No medical professional in the Hamilton County health department or the State Heath department has stepped up to coordinate diagnosis, monitoring, followup and reporting and treatment.

Sure the Ohio Department of Health sent this letter  advising people that their health care provider had identified them as one who may have been infected. Sure local health departments worked to notify people , but that’s pretty much been it. They state here’s what to watch out for, see your doctor if you have these symptoms and your pretty much on your own.

I’ve covered this subject before. Should there not be a central response site or sites designated by the State as to where people can go to get the best help for meningitis . Hopefully in the next 48 hours together we can uncover the best place to get diagnosed and treated in Cincinnati and through out Ohio.

As a Cincinnati attorney I hope this update on meningitis victims lets you know that someone out there knows what you are going through and wants to do something about it. It’s my fervent hope that you get your questions answered and the medical help you need as the reality is more people are being diagnosed and 15 have died.

The fungal meningitis outbreak appears to have been contained to specific medical clinics. The Center for Disease Control has identified 76 places that purchased the tainted  steroid batches manufactured by the New England Compounding  Center, one of the culprits implicated in this crisis. If you received an steroid injection, although most were epidural, other have been identified, since May of 2012 from one of these facilities YOU ARE AT RISK AND NEED TO SEEK MEDICAL CARE

Anthony has a unique vantage point in this outbreak of fungal meningitis as he is located less that a mile from this Cincinnati Pain Management office, one of the four facilities identified in Ohio.

If you have received steroid injections, you are probably very concerned about the current fungal meningitis outbreak caused by contaminated shots. Meningitis can be fatal and, as of October 11, 2012, 170 cases of meningitis and 14 deaths have been reported in the outbreak. If you suspect that you may have contracted meningitis from a steroid injection, talk to your doctor right away.

If you have received a steroid injection since May 21, 2012, you may have received a contaminated shot. Symptoms typically appear between one and four weeks after receiving the injection, but some have appeared sooner, and some have taken longer to appear.

The symptoms displayed in meningitis resulting from contaminated steroids have been very mild in some patients. If you suspect that you may be at risk:

If you have contracted meningitis after receiving a steroid injection, or if you have lost a loved one to the fungal meningitis outbreak, in Ohio, please contact meningitis attorney Anthony Castelli right away. You may be entitled to compensation which can pay for your medical care, lost income, pain and suffering, and more.